The Science as Art contest began in 2015 as a way for students in the MSU College of Agriculture to show the beauty and detail of their work in the sciences. Winning projects are displayed during the annual Celebrate Ag weekend each November. 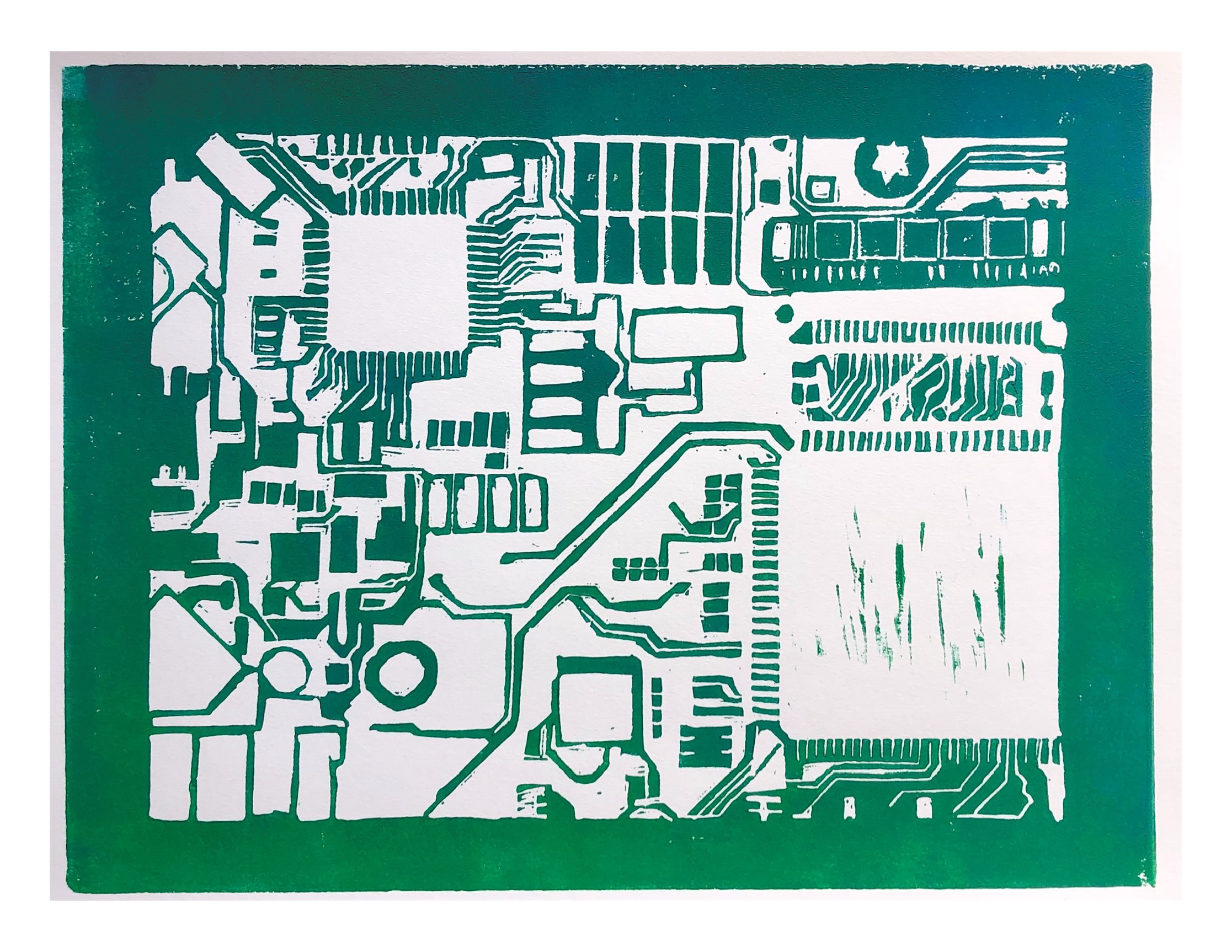 “Circuit boards are the maps to our computers, calculators, phones, cameras, and most things electronic we use to preform and observe science. They are often forgotten about as they are small and hidden beneath the layers of our devices, yet they are complex and vital for the modern-day science world where most things are recorded digitally. As someone majoring in environmental science this small but complex piece if technology will allow me to take pictures of the land, record and analyze data, and complete tests that may not have been possible in the past. As technology advances so will science but the beauty of the complex things will stick around. This piece was made using a process called relief printmaking, where the negative space is carved away leaving the image raised on the rubber block. Ink is then rolled over the rubber block and stamped on to paper.” 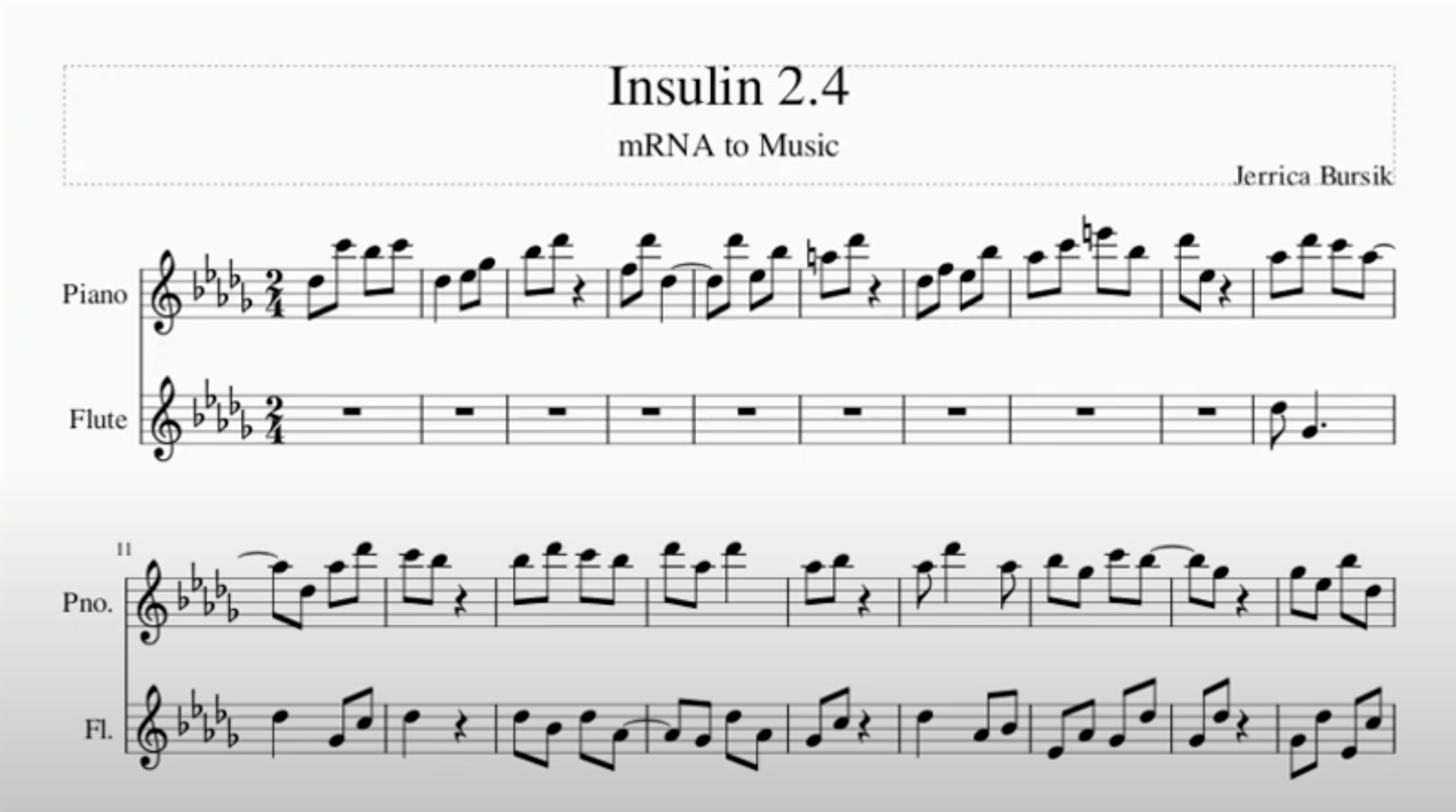 "All proteins, like human insulin and the receptors on cells that it binds to, are chains of amino acids. DNA is transcribed into mRNA, which translates into the amino acid sequence of a protein. This song was composed using the mRNA sequences of the human INS and INSR genes, but instead of coding for amino acids, the mRNA coded for notes. DNA, mRNA, amino acids and proteins in science all interact in similarly beautiful ways as melodies and harmonies in music."

You can listen to Jerrica's composition on her YouTube page! 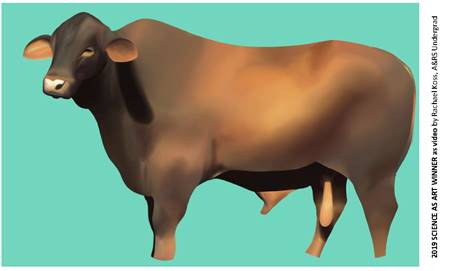 "I think that my work exemplifies science as art because it includes two of the things we can learn the most from but also look at in awe. We look out into these mountains every day, into the kind eyes of a horse or at a cow admiring their calmness, not knowing all the wonders and secrets they truly hold. Although as scientists and students in the College of Agriculture, it's our job to explore them every day to find out. What a wonderful job we have. Adoration for these animals compelled me to spend 11 hours and 44 minutes on this illustration of the Santa Gertrudis."

Rachael's full project was a time-lapse video of the process by which she created this image. The complete video can be viewed on MSU's YouTube page. 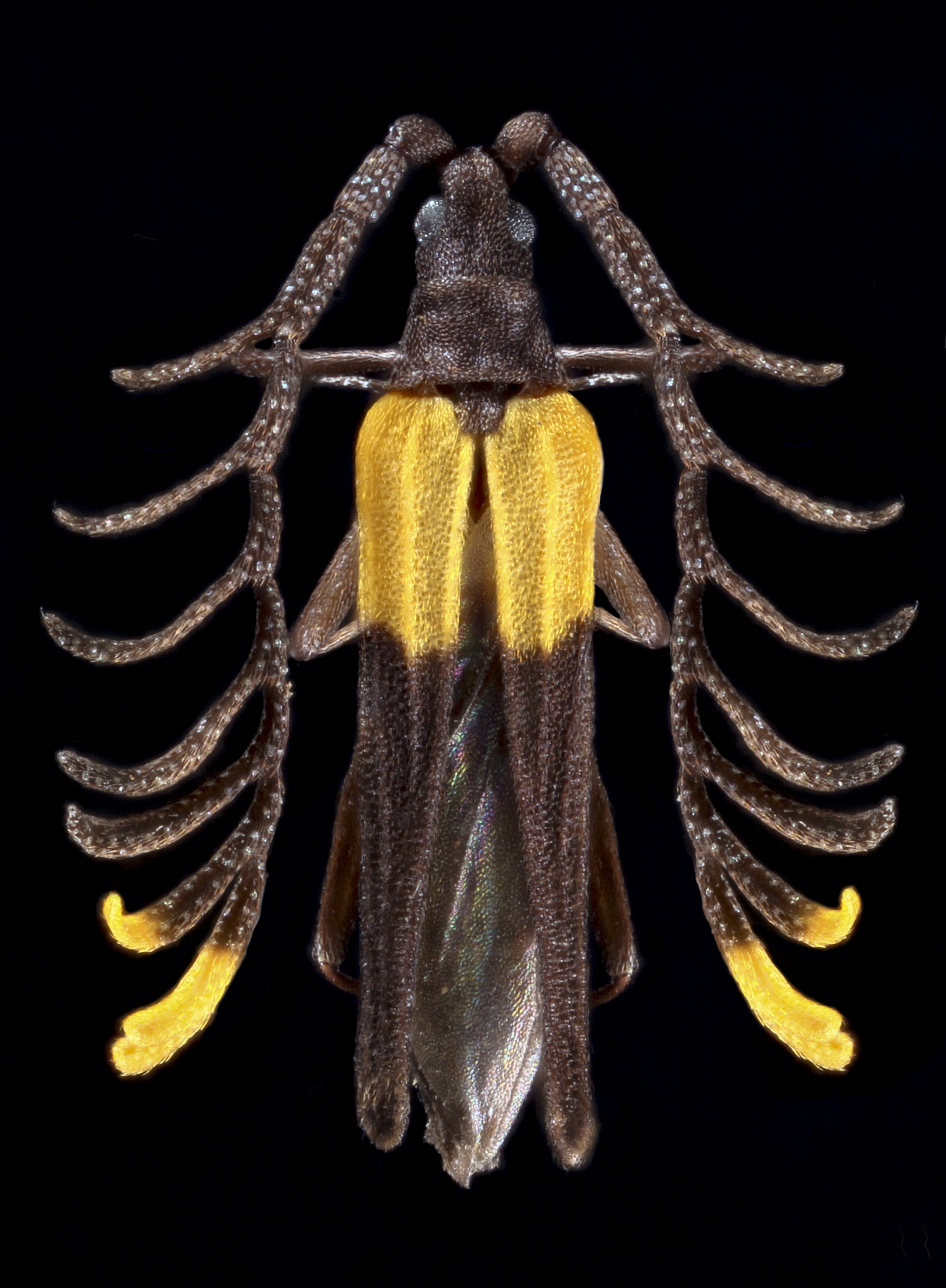 "The creature depicted in this photo is an adult male beetle from the family Lycidae, known as net-winged beetles, and it belongs to the species Leptolycus (Baholycus) flavoapicalis Bocak. The image presented here is the result of four hours of work, and a perfect example of how science can aso be interpreted as art: 45 photos of this tiny specimen (about 5mm long) were taken with a Canon T3i DLSR using an MP-E 65mm lens and staced and aligned using the software Zerene Stacker; the final image was edited in Adobe Photoshop and Adobe Lightroom. Beetles are the largest of groups of animals on Earth; one in every five living animal species is a beetle. The species in this photo belongs to a rarely seen and poorly studied group of beetles within the family Lycidae, the tribe Leptolycini, subject of my PhD studies. Beetles of this group are distributed in South and Central America and the West Indies. They are unique among beetles: adult males (like the one in the photo) have wings and can fly, a pair of long antennae and the general appearance of a beetle; adult females are completely different. They are worm-like creatures, have no wings and live in the ground among leaf litter. Based on individuals of Leptolycini kept in the Montana Entomology Collection, I am describing over 130 new species of Leptolycini, reconstructing their evolutionary history using morphology and DNA data and trying to understand why they have such a unique biology." 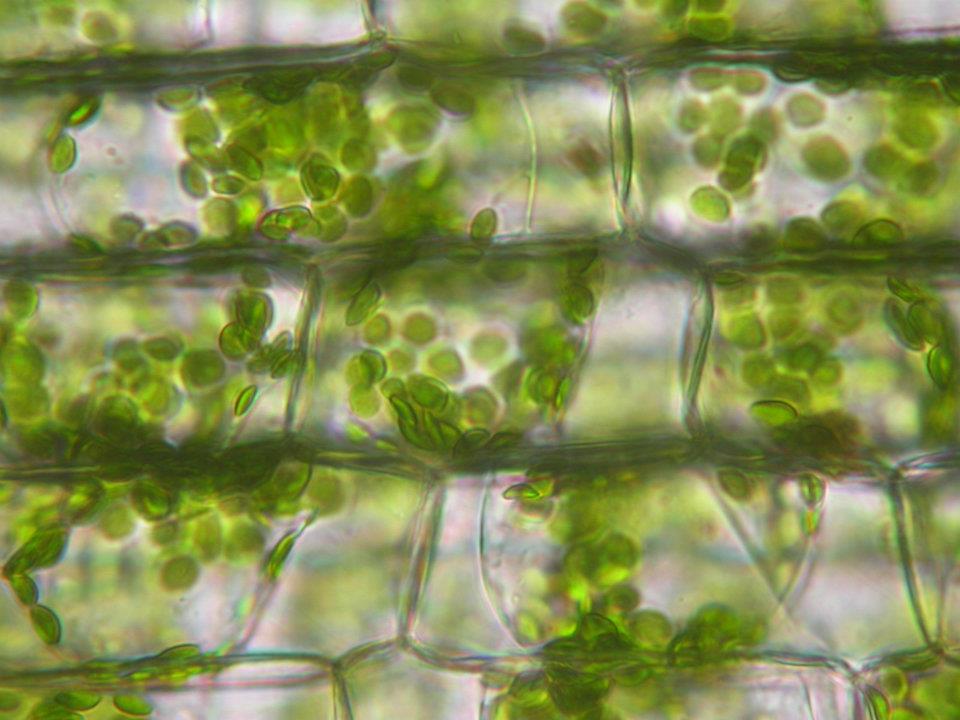 "This is a photograph I took of an elodea leaf undergoing plasmolysis (shrinking of the inside of the cell due to water loss)." 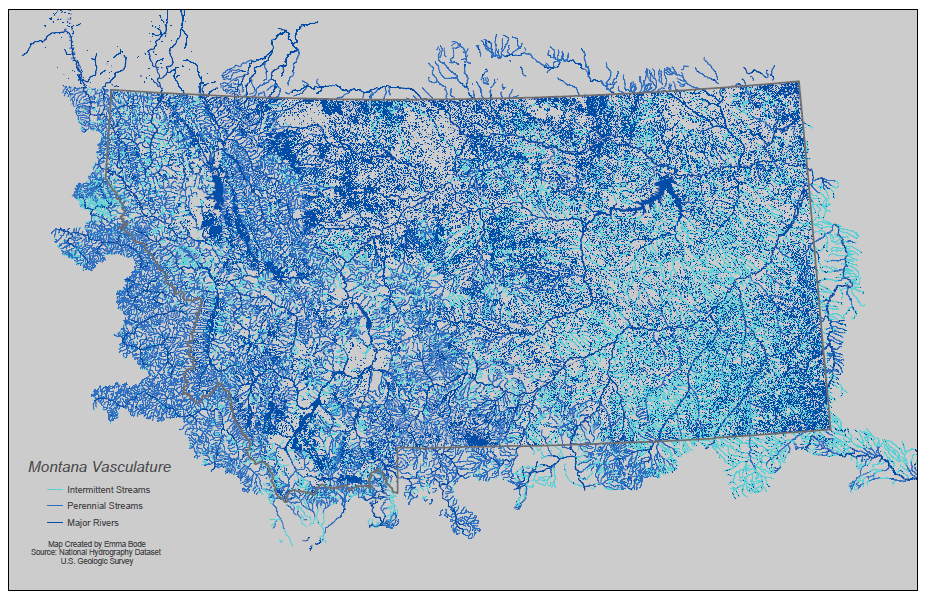 "Water is life. Just as we depend on our veins and arteries to transport sustenance ot our bodies, Montanans depend on streams and rivers to support our crops, cities and ecosystems. This piece was created in ArcGIS with the National Hydrography Dataset. The NHD represents the national drainage network with features such as rivers, streams, canals, lakes, ponds, coastline, dams and streamgages. This dataset is typically used in general reference maps and for scientific analyses exploring cause and effect releationships in discharge rates, water quality and fish populations. Through careful selection and symbology of the feature attributes, I generated an aesthetic interpretation of Montana's hydrology. I chose to depict the streams and rivers extending beyond Montana's border because water is subject to topography, not political delineation." 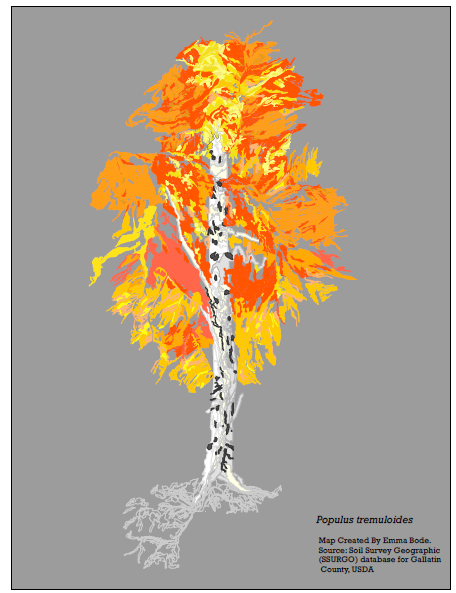 "The connection between science and art in the geospatial sciences is overwhelmingly apparent to me. Stuart Challenger's GIS courses stress the importance of good design. Taking this experience a step farther, I created a purely aesthetic interpretation of spatial data. I created this piece using soils data for the Gallatin Valley. Soils data is an ideal dataset for artistic manipulation because it is made of many small polygons that are each unique, much like a child's Color By Number worksheet. In order to differentiate classes of polygons, I selected and exported them as a new shapefile. I created several shapefiles for the leaves, three for the trunk and one for the roots. I then mainpulated the colors of each shapefile to produce the desired image."